Sunday’s ride was another Meetup Ride, and in a way, it probably should have been posted as a biking++ ride.  This is not what I consider a leisure Sunday ride … in fact, it was epic.

I rode from home, which made it more impressive, since the start of the ride was at Saratoga Gap (corner of Hwy 9 and Hwy 35).  First, it’s a 16 mile ride up Hwy 9, and it get in 2000 feet of climbing before the ride even started.  There were plans to have a group start from Starbucks in Saratoga, but Bronwen has to bail, and I think that lead others to drive up instead.  Not me!

Last time we did this, the descent down Hwy 9 was cold, and a little damp.  And did I dress early for this?  No, of course not.  I only had arm warmers and a light vest.  Lucky for me, it wasn’t that cold, and it was dry, so I was okay.  However, the group sped down Hwy 9 like a locomotive train.  I thought I can get down into a tuck and catch the group, but they were nowhere in sight.  I had to high tail it.  Do they know what the climb is like?

I caught up to the group on the next turn, which was just after Bear Creek.  This is a nice alternative from the usual route I do, which avoids a busy section of Hwy 236.

We finally get to Jameson Creek, and the fun begins.  It’s something like 1700 feet of climbing, but in a short 3.5 miles.  Damn, that’s steep.

I didn’t feel like I was climbing strong, but much to my surprise, it was my third best.  Amazing what the body can do when you just work within your limits.  I did get passed my one guy from Team Fremont, and we briefly chatted about why we are doing this tough steep climb.

I get to the top, but the lead group went on ahead.  I decided to wait for the rest of the group.  In the meantime, the rest of the Team Fremont group reaches the top.  They are a fun group, and they had a sag wagon following them.  They even offered me water and bananas, even though I’m not on their ride.  Cameraderie in cyclists is just awesome. 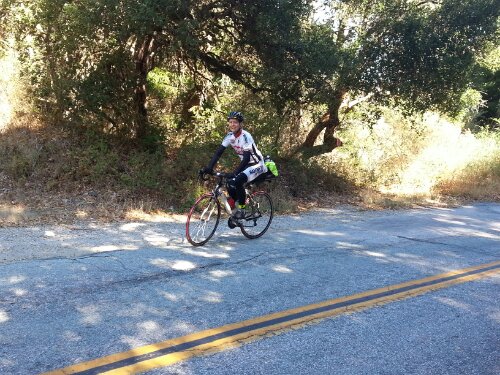 Rhysly, Steve, and Dillan get to the summit, about 30 minutes after I got to the top.  Big kudos to Rhysly for completing this, who 1 year ago could hardly finish climbing Mt.  Eden.

We continued on Empire Grade to Alba, where we then take a hair raising descent down to downtown Ben Lomond. 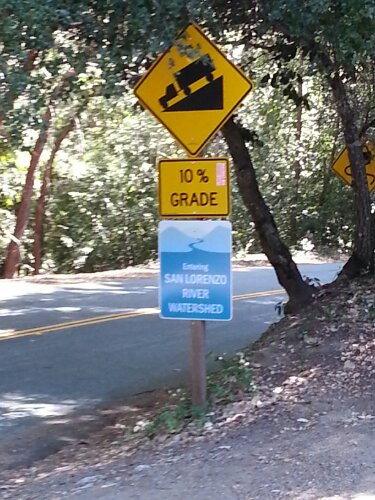 Don’t believe the 10% sign …. there were done 20% sections there.  My disc brakes came in handy here, but just hope it doesn’t overheat.  At least only the disc will get hot, and not the rim.  That was a crazy descent.

We regroup at a gas station, but that was really the last we stayed together.  We got separated once we started climbing Zayante.  At this point, I think my legs are recovered from the steep Jameson climb, so now it’s steady 10 mile climb up to Summit Road.

I ended up climbing solo, and when we got to the top, I then went on , my own route back home.  It’s a little less climbing, and makes the whole ride one complete loop.

I was tired by the time I got home, but not completely exhausted, so I guess this is a good thing.  One problem … it’s a Sunday, and there is no recovery day before going back into work.  I guess I’ll have to use my commute in as a recovery ride.

Meetup Group at the start of the ride, before the climb up Page Mill

Is it even possible to have a social ride, climbing up Page Mill Road?  Well, after Sunday, I have to say, yes, it is possible.

It was a pretty good size group, and I think we were all around the same skill level, so that made the ride even more pleasant.

I normally would make my way to Arastradero and Page Mill, or even start from Foothill and Page Mill, but on this ride, we wound our way through residential neighborhoods, and a climb up Taaffe Road … nice alternative to Altimont.  We got onto Page Mill at Altimont, and that’s where the social conversations stopped, and the breathing began.

We did have a short water stop right before the ramp, and last hard climbing on this stretch.  It was surprising to hear a lot of people didn’t even know about this water spiggot.  Personally, I don’t really find it’s critical if all you are doing is just the Page Mill climb … the only climbing left is just the ramp after that, and the rest is fairly flat … but that’s just me.

We proceeded to head south on Skyline towards Hwy 9. Now there is chipseal on Skyline, but it is still rideable … a little rough but actually rideable.

I was trying to upload this to Strava, but it had problems.  I had previously, erroneously, exported a video file onto my Garmin … I had the Garmin loaded as an external drive, and I forgot that it filled up the flash drive on my Garmin.  As a result, it could not upload the data, as it could not write.  Oops … Oh well …. it would have been nice to see the data, but shit happens.