At the beginning of the year, I decided that I will go for another Triple Crown this year.  The California Triple Crown is 3 double centuries (200 mile ride) within one year.  I attempted the same thing last year, but I couldn’t finish one of them.  One reason is most likely due to fitness.  So I decided this time around, I’m going to train for long distance rides, so that my fitness level would be up there.

I led a ride, which I figured would be around 100+ miles, if I started from my house.  The ride basically went out Old La Honda, out to San Gregorio, then head southbound, climbing Stage Rd, then head out to Pigeon Point Lighthouse, then come inland via Gazos Creek and Cloverdale, then back on Pescadero Rd back through Alpine, then Page Mill, and then back into Palo Alto.  I figure this shouldn’t be a problem, just a longer ride.  I recall Ramon saying “Looks like a a good route and doable on paper”.  It turned out, for whatever reason, this ride was a lot tougher, not just for me, but for everyone in the group.  Was it because of the off season?  Perhaps.  Was it because we hammered too hard in the beginning?  That is a good possibility.  All I know is, as I am writing this, my legs are as sore as I can remember in recent memory.  This is just another in a line of classic Wrecking Crew rides … you know when you have been through a typical Wrecking Crew ride … your legs feel it.

Ok, on the ride itself, I met up with Ramon and Chris in Los Altos, at Bicycle Outfitters, and we decided to leave early enough, so we wouldn’t have to hammer it, pacelining at a brisk pace, just to get to the start in time.  We took an easy pace and got to Woodside 10 minutes early.  Few of the usuals got there a little late, but that’s okay.  It gave us time to chit chat and fool around.  However, the waiting around made us a bit cold.  According to my Garmin, it was around 44 F.  That’s cold. 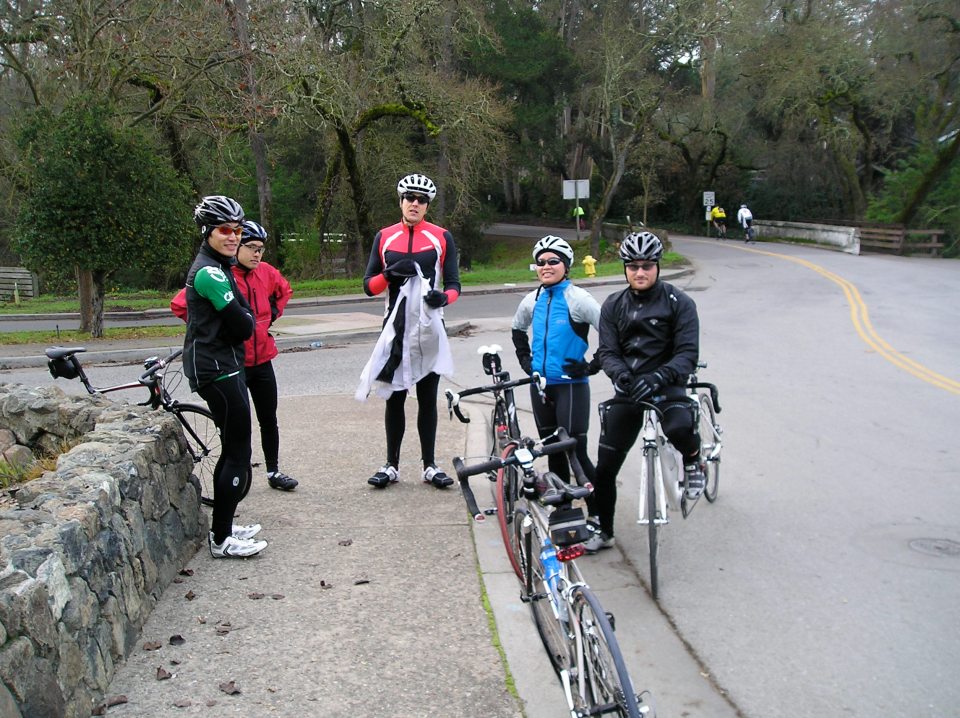 From Left to Right, Michael, Donald, Chris, Ruth, and Marco.

When we finally started going, the only thing I can think of was hold ccc-cold it was.  Hmmm … I wasn’t nearly this cold when I got to the start.  Oh well … on we go to start the first climb, Old La Honda.  I didn’t want to time myself on this climb, but I still decided to employ the strategy of starting out in my big chainring, then slowly shift over to middle then small chainring.  I was not long before I got into the middle chainring, and I even got into my small chainring at about halfway point.

Chris was gung ho on wanting to check out his timing on OLH.  I didn’t want to find out what it was on the spot.  As it turned out, poor Chris got a flat almost after leaving the designated start of the climb (where everyone usually starts the timer).  In the end, my time wasn’t all that great … 29 minutes.  I was surprised that Chris didn’t catch up and pass me up, but I guess it took him a lot longer to change the flat than I thought.  The tandem even got to the top before he did. 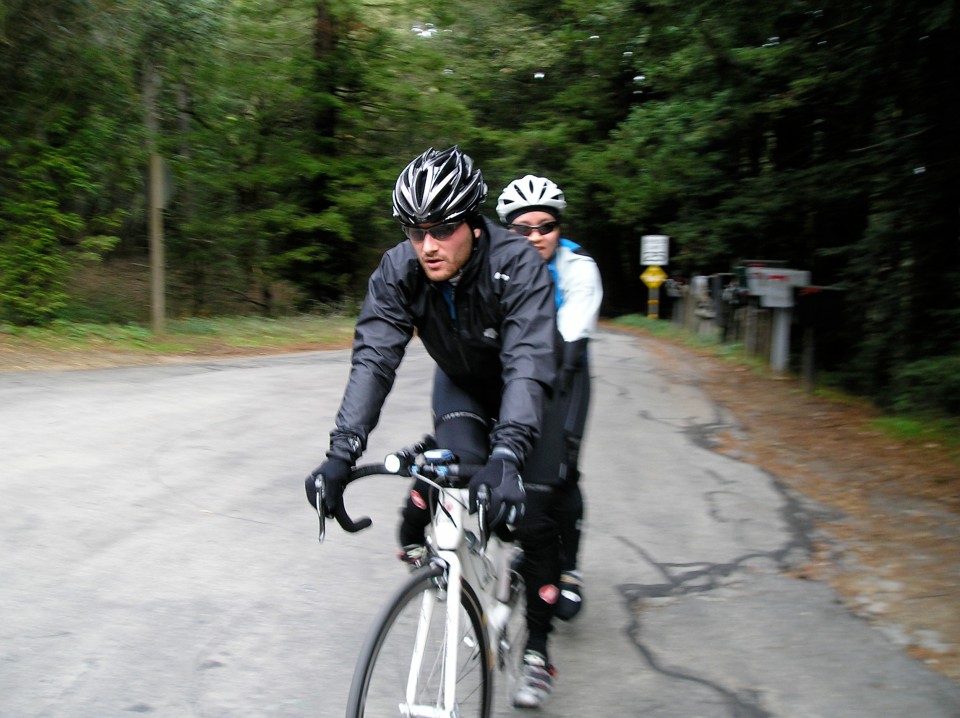 We were all waiting for Ben, who was riding from home in Los Gatos, to meet us at the top of OLH.  He started out a little late, and he did catch up with Chris, and they both arrived at the same time.  This ride is starting to turn into a hot, cold, hot ride … warm up, get cold, warm up, get cold.

Off we descent to San Gregorio via 84.  I was having a hard time getting my speed up, and fell way behind.  Then, suddenly I see Donald and Ben off to the side.  We suffered another mechanical.  This time, it wasn’t a flat, but Ben’s rear freewheel had some issues.  The lock ring was a bit loose, and it prevented the wheel from moving.  The rear axle halves were loose too.  We were able to get it back in, and we were crossing our fingers it would stay put.  There wasn’t a bike shop close by … either climb back the way we came, for about 10-15 miles or so, or just keep on going.

Well, we kept going.  We got into a pretty good paceline, each taking turns pulling the lead, and that made the descent more enjoyable.  What I hate is going down that long stretch, all by yourself, and time trialing it all the way to the coast.  That gets demoralizing and you expend a lot more energy.

We caught up with the gang at the General Store in San Gregorio, then headed on to Stage.  I think my climbing legs were kicking in, as I was hanging in with Ramon, Donald, and Michael.  We normally take Stage Rd in the other direction, so this would be a little different.  The tandem was having problems at this point.  They hadn’t been riding very much lately, but we weren’t in a real hurry … since we were resting up at the store in Pescadero.  Wow, I’m not the last one on the regroups on this ride.  That’s a different feeling!

We continued on Hwy 1, and the pace was a real killer.  I hung in with the tandem for a little while, but the front pack started distancing themselves from us. 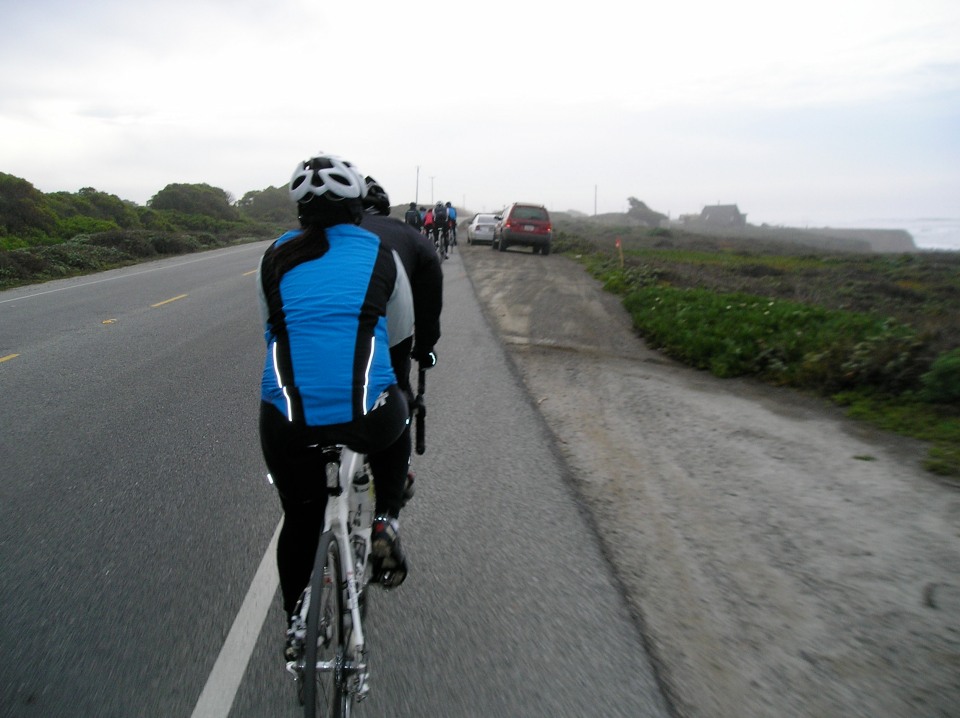 I passed the tandem to try to close in on the gap, but I didn’t want to kill myself.  I also want to help pull the tandem a little bit, but they just didn’t have the energy, which is shocking.  I guess that’s what happens when you have that much time off the bike.  Anyhow, I went on ahead, but I was out there solo.  But at least I got to see the waves crashing against the shore.

This is not the first time we’ve been out to Pigeon Point Lighthouse, but in the past, we always whip past it, without stopping by.  This time, we made it our stopping point, so we definitely we take a view of it.

We continued on Hwy 1, for about another 2 miles, before heading inland via Gazos Creek.  We had a few climbs here, and I took the lead up here (I figured I should, since this is my route, and I didn’t want to feel that I am freeloading off of everyone).  I felt like I was close to the same level as everyone on this ride.  The climbs were not terribly long, and they were gradual enough to keep everyone within reach.  In fact, we got into a bit of a paceline, climbing up the shallower section of Pescadero before reaching the steeper section of Haskins Hill.  When we did get to the steeper section, I did fall off the back.  However, for the first time, I was able to pass up Ben, and again, not the last one up the hill.  I’ve gotta tell you though, this is the first ride for Ben since coming back from his vacation of 3 weeks … that’s 3 weeks off the bike!

It started to get late, so Ben decided to go on ahead.  Chris and Donald went a little later, going on Hwy 84 then back home.  While we were waiting for Marco and Ruth, we were debating which way to head home.  Alpine would really suck at this point, as we were all very tired, and with no energy at all.  When Marco and Ruth showed up, they were absolutely not going to make it up Alpine, and preferred to go on 84.  In the back of my mind, I was hoping everyone else would do the same, and we did … yippee!!!  Alpine is one tough hill, especially after riding for 90 miles.

We eventually made it back, just before dark.  It’s a good thing I had my front blinkers on (I needed it, as I started at 6:45 am, and it was dark and foggy at that point).  However, even by the time I got home, it wasn’t dark enough for the lights to take effect.

I don’t know what it was about this ride.  As Ramon stated, on paper, it didn’t look that bad, but this really did in everyone.  After getting home, I was so tired, just simply walking around the house became a chore.  I thought maybe we all took a really fast pace, but it wasn’t all that much faster in my opinion … or maybe it’s because I am in better shape than before.  This “better shape” does not account for why everyone was feeling tired and weak by the time we reached the top of Haskins Hill.  Maybe we all needed solid food.  Perhaps we should have taken a short detour to Pescadero for solid food before going up Haskins Hill?  Maybe next time.