May 11th is Bike to Work Day in the San Francisco Bay Area.  It also happens to be Global Bike to Work Day, although I don’t know who decided that.  All I know is Strava started promoted this, and it stuck in everyone’s mind.

The problem for me is I start on the road by 6:30, and most Energizer Stations don’t have their tent set up by the time I get there.  I can always count on the station on San To.as Aquino MUT at Agnew.  They usually have a nice spread.  Bagels, M&Ms, coffee, … Mmm, nice way to start BTWD.

It was a pretty good turnout.  Nice to see happy smiling cyclist faces on the trail.  I did see one trike, so that’s the only odd bike I saw out there.  Yes, there were Bromptons, Dahons, and a few recumbents, but strange that I didn’t see any Bike Fridays. 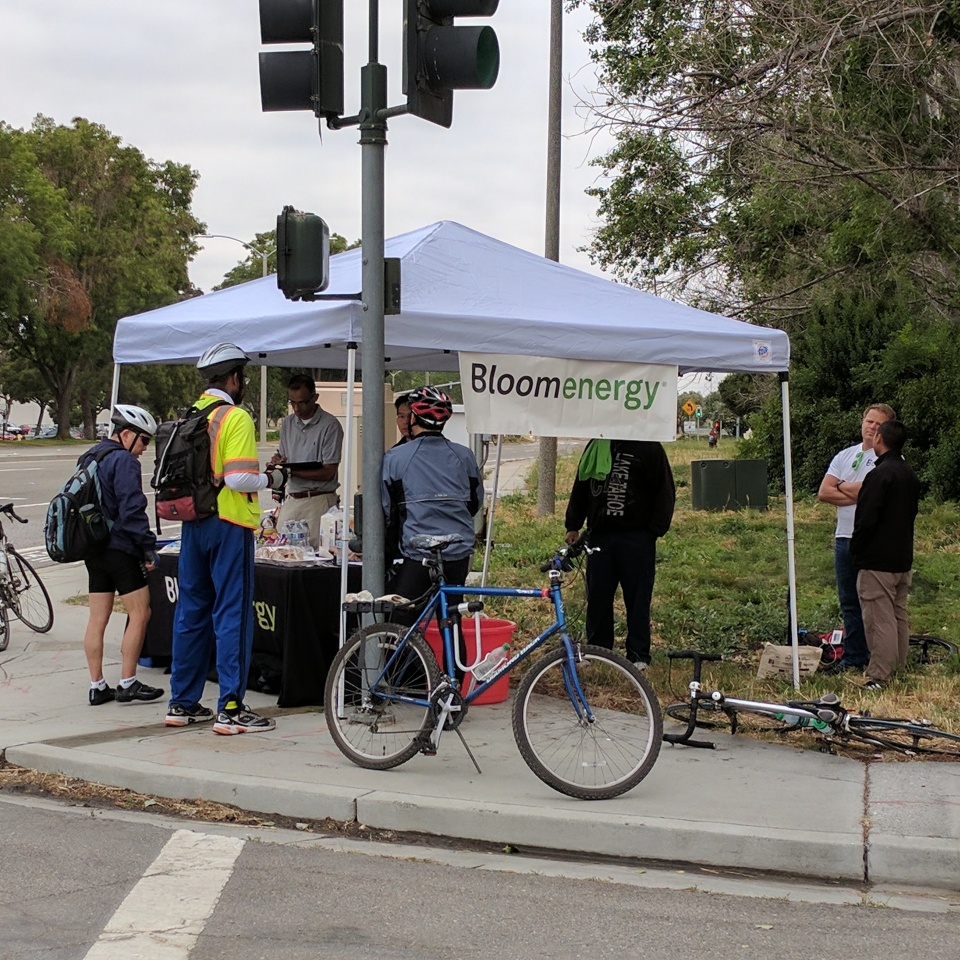 Next station was at Lawrence Expressway and Baylands Park.  More bananas, and Hobee coffee cake … Mmm.  Starting to get full now … LOL

I ride further on and a couple of stations just barely had their table set up, and another had it all laid out but no one there.  Odd … I had enough anyways, so just straight into the office.

I know that National Bike To Work Day is next week, and some cities don’t have it till next month.

We also had a Bike to Work lunch, but that was the day previous to Bike to Work Day.  This is all very confusing.

May is national bike month, and today, May 12th, is Bike to Work Day (in the Bay Area at least).  It’s always exciting to participate in Bike to Work Day.  The volunteers at the Energizer Stations are so energetic, and excited (I don’t know how they get all that energy at 6 am).

So if you are wondering why there are so many bikes on the road today … well this is why.  I kinda wish we had a bike day of the month … that way, this excitement will come not just once a year, but 12 times a year.

I was able to stop by 4 Energizer Stations. 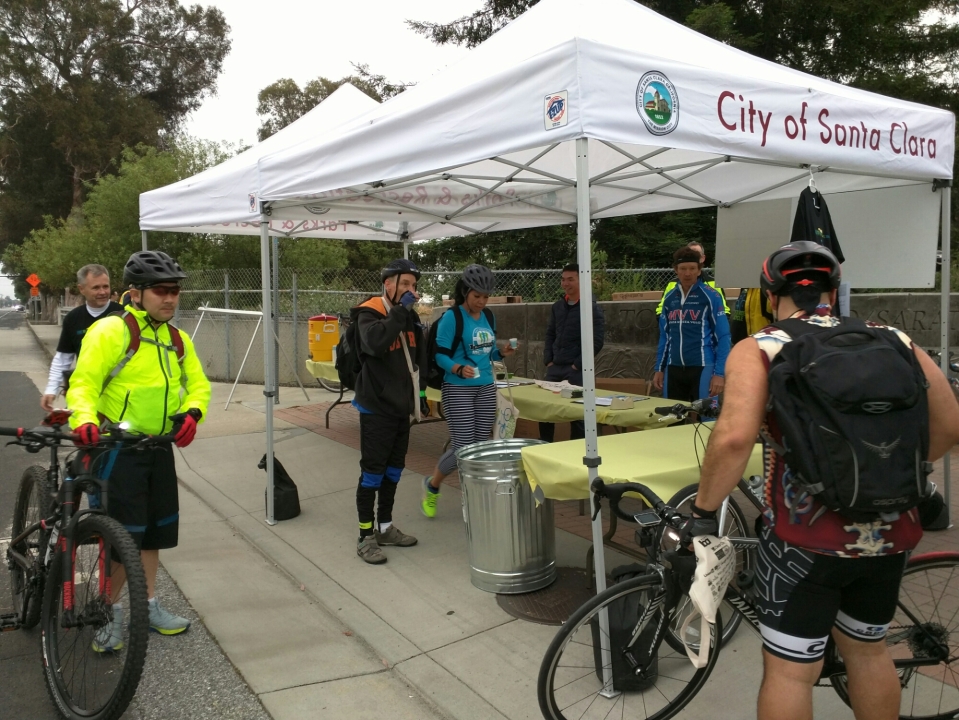 Energizer Station off of San Tomas Aquino MUT at Agnew

Energizer Station at the end of bike trail by Baylands Park 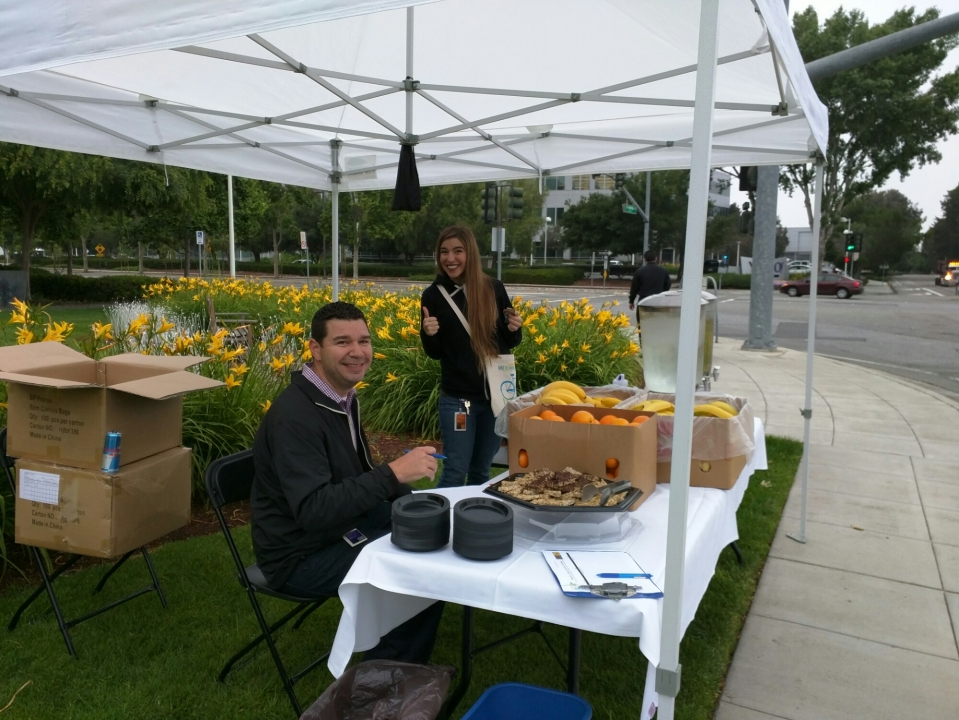 What type of schwag did we get?

For the ride, I got 1.5 bananas, half a zucchini bread slice, granola rice Krispies, mini cup of trail mix … That’s a healthy breakfast.

It was Bike to Work Day, Thursday, May 14, 2015.  It’s the time of the year to ditch your car, take your bike, and ride into work.  Actually, it’s more of a routine for me, since I bike to work nearly every day.

This year, there was forecast of rain, and a possibility that it would dampen the morning commute.  However, that did not materialize, and it was still a pleasant ride into work (although a bit cloudy).  That did deter a bunch of people from riding in, as some of the volunteers did mention that the turnout was lower than in previous years, due to the threat of rain.

I decided I wanted to get as many free swag as I can possibly get.  I planned it the night before, and my goal was 8 Energizer Stations.  I made it to 6 of them.  I followed the Energizer Station Map to determine my route, but two of them were not out there, nVidia and Marvell.  Either they couldn’t make it, or I was looking on the wrong side of their building.  I should have stopped by Oracle, as they had a big gourmet spread, but I had to be in the office by 8 am. 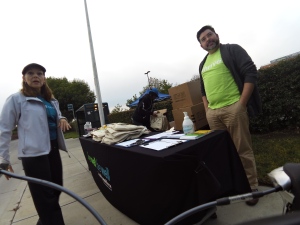 My first stop was Kaiser on Homestead, and I arrived there around 6:10 am, and much to my surprise, they were there, ready to serve me and greet me.  Kudos for them to be out there that early, and they had a pretty nice spread too.

No Smoothies this Year 😦

One of the stops was along the San Tomas Aquino Multi-Use Trail, which in previous years served smoothies.  It was pretty funny, because they had a bike, on a trainer, and the drivetrain would also drive the blender.  This year, the guy couldn’t find his pitcher, so no smoothies this year.

We actually had two stations that were very close to work.  One was by Bloom Energy, who had a spot right outside of the Sheraton Hotel.  The other was Yahoo, and the guy there recognized me from previous years.  That was cool.

Hope you all had a great Bike to Work day.  It didn’t rain on the ride home either (although I was in the office late enough, where I couldn’t attend the Ride Away From Work bash in San Jose).