Montebello LKHC 2013 and My CX Excursion Across Montebello Trail

Posted on October 6, 2013 by sevencyclist

Montebello is the beginning of the LKHC season.  This is a series of hill climbs that begin in October, and goes on for 2 months on successive Saturdays.  It’s a great series, and is completely volunteer driven.  This is the 3rd year in a row doing this, and I just love it.

Got to see my friend Mark, who I haven’t seen in a while.  In fact I think the last time I saw him was on the Hwy 9 LKHC Time Trial.

I also spotted Gregory Smith, who I interact with in G+.  Good to finally meet someone in my social media outlets in person.

Montebello is my local hill, and usually when I climb it, there’s maybe 3 or 4 cyclist I see on the road, so it’s cool to see the road suddenly filled with a line of 70-80 cyclists.  Awesome!!!! 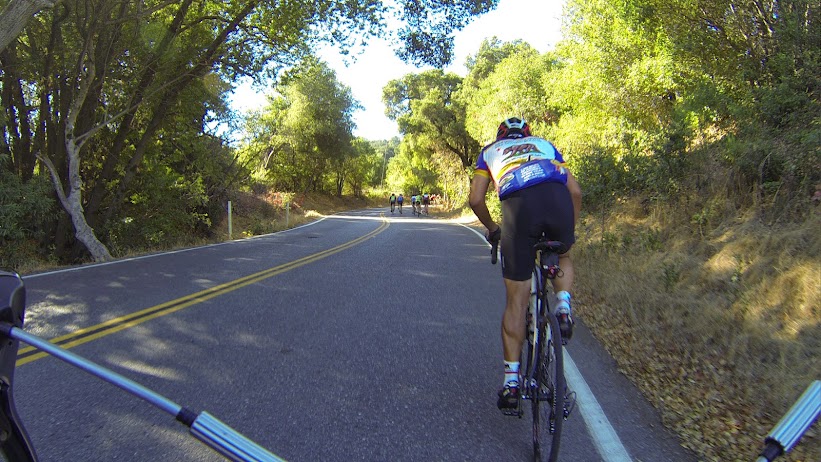 As usual, people are passing me at will, and that’s fine … I’m in it to finish it … and hopefully I won’t be the Lantern Rouge.  Eventually, I found myself in the same level as a group of others, and I used their pace to maintain my pace up the rest of the hill.  One of them is a tandem, and it’s awesome for them to climb this massive hill on a tandem.

I had no clue where the photographers were on the route, which was probably a good thing … get more candid shots that way. It also have more suffer shots as well.

Got up to the top, and Strava tuned this at 49 minutes, while the LKHC has this at 45 minutes.  Obviously, different start time for that segment.  It’s not my best, but I’m still pretty happy with it, considering last week, I could only muster 55 minutes up this hill.

The paved road ends here, but I decided to continue on the unpaved dirt and sometimes loose gravel section of the Montebello Trail.  Some spots are hard on a road bike, due to traction, it lack of it.  However,  I know others have done it, so let’s give it a try.

The view is spectacular, and since there are no cars, I don’t have to worry about cars.  Most of the bikes I saw on here were in Mountain Bikes.  I wonder how many thought “what’s that idiot going here on a road bike?”

This is a view I wouldn’t have seen in a paved road.  There were a few seconds where I was fishtailing, but I got used to it and was able to recover.

I finally got to the paved section, but by the time I got to Page Mill, I was stuck inside a gate. There was no outlet. Was I riding inside someone’s backyard? Luckily, I could put my bike over the other side of the fence, and crawl though it to get to the other side on Page Mill. Hopefully no one saw me.

On my way back, I’m not sure what it was, but I started sneezing and had a runny nose. This also fatigued me, and I was barely inching my way back home. It’s this an allergy attack, or did my cold re-surface? Luckily I got the LKHC in before this thing hit started. Is this another day I’m stuck indoors while it’s gloriously sunny outside? This just sucks.