I haven’t done Saratoga Gap in a while so I decided to do that today.  I was also planning on doing Big Basin today, as I haven’t done that in a while either.  However, when I’m out on a solo ride, plans can change really quickly. 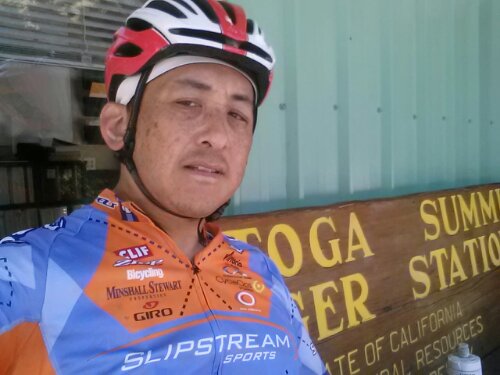 I set out to do the Hwy 9 climb right at the base in Downtown Saratoga.  I didn’t want to do the Redwood Gulch.  After a quick stop for water at the fire station, I headed south on Skyline, with all good intentions of going all the way to Bear Creek, then heading over to Big Basin. However, I always pass by Black Road, and never ride it.

Today, I decided to take Black Road. It’s a nice descent, with many Redwood trees and was thinking thank God I’m descending not climbing this beast. This road took me all the way down to Hwy 17.

I could just cross over too the other side of the highway, then take the gravel bike path back to Los Gatos, but I decided I didn’t want to do that. No, instead, I remember Montevina connects up to Bohlman, and I can take that back through Saratoga. Nice plan, right?

Montevina runs parallel to Hwy 17, but then it cuts up into some steep hills. How steep? Well let’s say it’s in the double digit altitude gains. This road was totally exposed, with a few trees here and there. It was noon, so the temps were high … not quite 100 … but 99°F.

There was absolutely no one on this road, with the exception of a few residents and a mail truck going up the hill. The grade was consistently staying at double digit numbers. There were a number of fantastic views overlooking Lexington Dam, but it was so hot, and the climb so tough, I couldn’t afford to stop to take a picture.

As it turns out, the hill got the best of me and I ended up going for a breather a few times, particularly when there was a shade with a slight breeze. I definitely was not going for any records (since this was my first time going up). I could see one last stretch before the paved road ends, and I had to stop one more time, take a deep breath and push it.

Finally made it up, but I still had 0.7 more miles off-road, but hard packed. I had to stop a few more times and even had to walk it for a while, more to get traction. But then, right before reaching another gate, there was a little steep descent, still on dirt. That was scary, especially on a road bike. 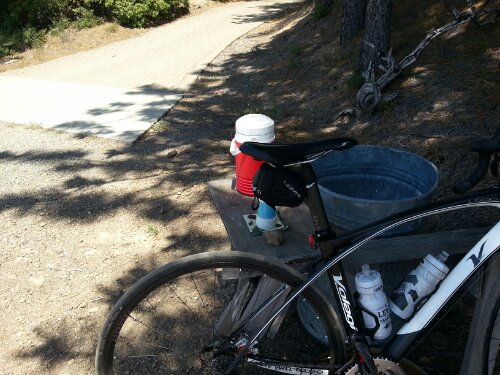 Reaching the summit, someone left a cooler with water. Oooh that’s so nice. Thank you!

I still had a little ways to go still on dirty but the hard part was over. I was so relieved to be back on pavement, but more importantly, on the other side of the mountain. Now all I had to do was negotiate the steep descent down Bohlman.

Got into Saratoga, and I was, hot, I was tired, and there’s a Starbucks. Ice froappuccino time. I think I’m dinner, 5300 feet climbing in this heat … that’s enough for me.