Posted on October 7, 2012 by sevencyclist

It’s October, and that means it’s Low Key Hill Climb season.  The first one of the year, as with every year, is Montebello Road, which is right in my backyard.

I got to the staging area in what I thought was ample time.  What I thought was strange was I couldn’t find the person who was taking check-ins, giving me my number, etc.  After waiting around a while, I got to talking with one rider, and thought it strange … where do we check in.  He then told me it’s 1/2 mile down the road in the parking lot.  Damn, they changed the check-in location.  Gotta high tail it down.  I was one of the last few riders to check in, but at least I got everything all squared away.  Now to sprint back to the staging area (along with some short steep climb to get out of the parking lot). 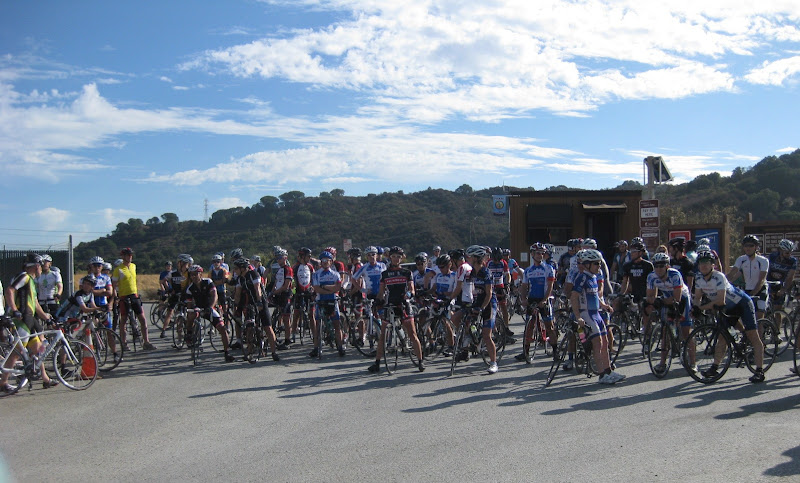 There was a good number of riders, as usual, for the first LKHC of the year.  It’s an exciting time, where everyone gets together, reminisce about the season, and kind of a reunion of sorts.  This is a mass start, so they wanted the faster riders up front, and slower riders near the back (I ventured towards the back).  It was funny, Dan mentioned if you could do OLH in 16 minutes, then you may want to be near the front … uh yeah, right … I can do that in a car.

It was a mass start, and we had a short 1/4 mile flat stretch before hitting the climb.  Right at the right turn onto Montebello, two riders collided with each other and went down … not even on Montebello yet.  I think it was a matter of the inside rider making a move to the left, or something like that.  Not serious … they just had to untangle each other.  Wow, what a way to start the event.

I took comfort in knowing I wouldn’t be the absolute last in the group, as I was able to pass a few riders.  I did pass one family, where a guy on a tandem, with his daughter as a stoker, who couldn’t even reach the pedal.  They had a contraption on the tandem to allow a kid to pedal along.  He also had his older son, who was probably around 10 or so … it’s great to see a family outing on one of these hill climbs, which are not easy.

There was one guy I was targeting, that as long as I stay close to him, it should give me a pretty good pace.  I wanted to pass him on so many occasions, but just couldn’t.  Finally, at the last steep section, I feel like I have my chance.  I got a burst of energy, knowing that it’s only 200 more feet of climbing.  I was able to wizz past him, and ready to finish the climb strong.  One problem … there was this truck and it slowed down, and he was in my way … Nooooo!!!!!  I lost my momentum there, but it was only about 100 feet more.  Oh well, I think I lost 5-10 seconds from that.

All in all, it was a great day, despite the mishaps in the beginning and the end.  It did get cold up on top … clouds were hovering, keeping the temps down.  After getting off the mountain, I went to do Mt. Eden, and then Saratoga Summit.  I don’t know what it is, but my legs were thrashed at this point.  All I knew was I wanted to find the quickest way home.  I was going to Los Gatos and do Kennedy/Shannon loop, or maybe even Hicks … but those plans were dashed, seeing how thrashed I was.

I guess I’ll make it a short day, and rest my legs, and watch football like the rest of the arm chair quarterbacks out there.