Solvang is the second double century on my schedule, and I was really looking forward to this.  After Camino Real, I felt I wasn’t really prepared for that, so I really trained, doing two centuries (hilly ones), and I even did a couple of rain training rides (I just hoped I wouldn’t have to use any of that training).

For once, I didn’t book at a Motel 6.  Instead, they were offering an event discount at the Days Inn.  I shouldn’t rely on map programs solely, as the directions guided me to enter 101, and the motel would be on the right 395 feet later.  Umm … there was only one way out …. and that is to exit on Santa Rosa, which wasn’t too far down, but still … I should have just done it the old fashioned way … using my eyes! 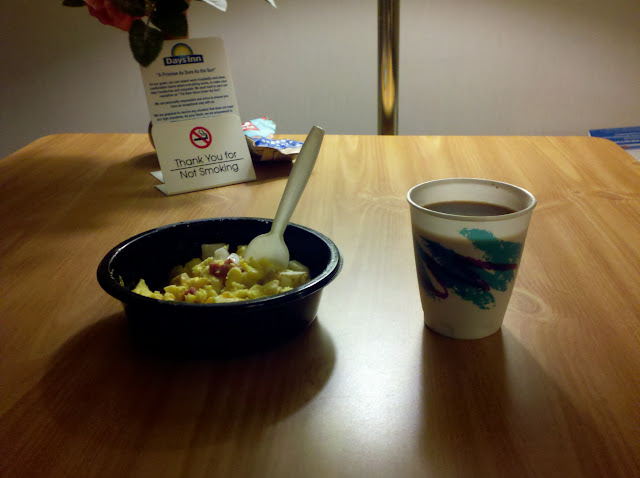 Usually, I revert to a quick bagel before the ride, and use that as my breakfast.  Not really healthy, eh?  Well, when you are strapped for time, you are limited in choices.  But with a refrigerator and microwave oven … I had more options.  Nice quick egg and ham breakfast with instant Starbucks … mmmm … now I’m ready for the ride!

I started out with my friends Lynn, Ron H, and Rick at the bright and early hour of 5 am. In fact, most of the riders started at 5 am.  We rolled out, but about 2-3 miles out, I found myself in front of my group, but didn’t find them behind me.  Later, I found out there was one of many flats on the day.  I decided just to move on.

I was supposed to head straight on Hwy 246, cross Hwy 154, then continue onto Amour Ranch Road … but I think I am quickly building up a reputation for getting lost.  Well, I thought I was crossing 154, but I somehow ended up on Hwy 154.  I couldn’t see anyone ahead of me, and no one was coming up from behind me.  Time to bring out my trusty Droid, and verified … yup, I’m on the wrong road.  U-turn time!

Back on the route, and then I nearly missed the next turn.  Some yelled out I’m missing the turn … this is not starting out too great.  First, I get separated, then I get lost once, and almost twice.  Time to play catch up … who knows how much time I wasted.  But luckily I didn’t lose too much time.

I eventually caught everyone on the Foxen Canyon climb, and the fun descent ensues.  Even after it flattens out, we were still picking up speed.  I caught up with a group of 5 or 6 fixies … yes, they are doing the double on fixed gear.  They were spinning like crazy, just to maintain speed.  It was getting me tired just seeing their cadence so high.  Imagine how tired they must have felt?

Got to the first checkpoint, but no sign of Lynn, Ron H, or Rick.  So just as I was ready to leave, I see them show up.  I let them know I’m moving on, just so I don’t get my legs cold.  But at least it’s dry, not raining.

Oops … did I say the dirty “R” word?  Around the 70 mile mark, I start feeling the first hints of dampness, which then sustains to actual rain.  It would then continue to rain throughout the day, and into night, without any breaks at all.  At the second CP, I could see everyone scurrying to put on rain pants, rain jacket, scuba gear, anything to keep them dry.  I also went ahead and ditched my rain slick (which was just making me damp, even without it raining), for my Goretex jacket.  Plus, it may keep me just a tad warmer.  And I also stuck around long enough to say hi, and bye to Lynn.  Ok, off I go …

I hooked up with Tawny, but Camino Real buddy, who I rode with to finish that other rain soaked double.  It was good to catch up with her, but had to go on my own, as she had to tend to her riding partner, who was lagging a little behind.  Onto SLO.  In years past, they would take the group out to Morro Bay, then loop around back to SLO.  The problem there was traffic.  This time, the route takes it one exit earlier, and skips the traffic around Morro Bay.  However, some riders ahead of me were used to the Morro Bay route, and they missed the Los Osos exit.  I realized that, and had to backtrack just to stay on the route.  Ok, that’s misdirection #3 on the day (in case you are counting).

Lunch stop is at mile 115, and much needed subway sandwich, and a little attempt to stay dry (head under the awning by the food).

The rain is a constant stream, contrast to Camino Real, where the rain drops were somewhat heavy at times.  The intensity of the rain didn’t change, and it was like you were taking a shower all day.  In other words, it was really annoying.

The next 40 miles or so were kind of monotonous … just stay on Hwy 1 for almost eternity.  It got so monotonous, that I ended up missing the next CP at Guadalupe.  I looked at the mileage marker, and just had to stop, since I knew I missed it.  Time to dig into my reserves, and grab some snacks.  Eventually, I hook up with my facebook friend Teresa.  Well, actually, we did chat a little bit last year at the CTC Breakfast Awards Banquet, but this would be the first time we rode together.  We proceeded to ride together all the way to the finish.

At least I got someone to ride with en route to Los Alamos (I remember it being monotonous, especially riding along Hwy 135).  It sure helped pass the time away.  If I had continued solo, I probably wouldn’t have anything left for the home stretch.  All we can think of was Cup O’ Noodles, just to get some warmth into our blood stream (although a little bit of hot sauce would have spiced things up going up the hill, eh?).

In years past, the last climb would go up Drum Canyon, but the descent was very choppy, and in the dark, that could be very treacherous.  So instead, we take Alisos Canyon, to Foxen Canyon.  The climb itself was not as bad as I thought it would be, and Alisos Canyon is nice and smooth.  I guess the Cup O Noodles did help, or did I just get my second wind?  We make a right turn on Foxen Canyon, and I am expected a hard climb up, but it was anti-climactic.  I guess I was climbing a bit better.  Now Teresa and I thought the climb would go to the wall, which is where we normally would go IF we were doing the Solvang Century.  So that’s what we did … hang a left to continue on Foxen Canyon.  However, something in me was second guessing it … no one behind us, no one in front of us.  I high tail it up the hill and yell out “stop, hold on”.

Ok, this is my misdirection #4 (but I guess you can say we didn’t have enough climbing, so just add another few hundred feet, right???) …. yeah right.  We head down the hill, and get back on the route by making a left on Zaca Canyon.  Wow, whaddayaknow … a constant stream of riders flowing through here.  Ah, yes … it was so good to see rider traffic.

In retrospect, if we continued on Foxen Canyon, we could have eventually met up with Ballard Canyon, which is where the route eventually wound up.  Oh well.  One last climb up, then the descent down Ballard.  Since it was wet, and this is a descent, it’s time to use that big investment in HID lights.  I turned everything full blast, so that I could see every nick on the road.  Luckily, no issues, and we ended up back at the start.  Made it with 30 minutes left to spare.  Woohoo!

Now with all the rain, wet roads, usually you see a lot of people with flats.  And I saw just that.  I saw so many people, stopped off to the side of the road, changing a flat.  Surprisingly, I was lucky to avoid that (even with all the gravel, mud, and all the crud left on the road).  Now just watch, I’ll go for a ride around the block, and flat out.  May days are numbered.

There were a number of DNF’s, so I consider myself pretty fortunate, or just maybe my training is on a different scheduler than everyone else’s.  Needless to say, I am very humbled that I have complete 2 doubles before most people have even started their triple crown schedule.

Planet Ultra reported that 484 riders registered for this ride, 379 started, and 288 finished.  Wow, that’s some telling stat.  They even extended the normal 17 hour time limit by one hour (due to cold, wet weather conditions).  Official results … http://racedaytiming.com/results.php?event=51