This is one double that I will always remember … This was epic.  This was formerely the Butterfield Double (hence the reference to Butterflood).  The days leading up to this event had predicted massive amounts of rain.  Since I pre-paid for this event, there was no question that I would do it.  I spent the money .. might as well put it to some good use.  Besides, not doing this would alter my gold triple crown jersey plans.

It started out ominous.  On the drive over, there was a 2 car fire which closed the freeway. Oh great … Just hope I’ll be able to make it to the mass start.  Luckily it cleared up with enough time to the start.

I started right at 6:15 am sharp.  There was definitely some adrenaline in the air, and the biggest concern I had was the pace may be too brisk.  After some chit chat after the first few miles, the group splintered up.

The first 30 miles are so reminded me of the old BCI rides (Bicycle Club of Irvine).  They were a nice series of rolling hills, and was enough to loosen up the climbing legs a little bit.  All that climbing I did previously (Mt. Tam, Mt. Hamilton, Mt. Diablo) definitely helped here.

I did get distanced from the group, and that meant having to read the route slip … gee, I haven’t done that since riding with BCI.  That’s where it got interesting … I’m used to having arrow markers on the road for an organized ride.

The route had us going through a maze through the streets of Dana Point.  After finally getting my route slip out, we had to follow the bike route signs along the streets.  There were so many twists and turns, and took more than a few double takes to make sure I’m going in the right direction … oh, and it started to rain at this point too.

We wound our way to the bike trail through San Onofre.  I should have taken a picture of the sign … it said “No Nudity”.  Not a sign you’d see everyday.

Rain stopped by the time I got to the first CP, but it was guaranteed to return.  Continuing on the bike path, I reach the south end, where it intersects with Las Palmas.  I see some riders hang a left, and it goes into Camp Pendleton.  I didn’t review my route slip, but I figure they were doing the double.  So I head on the route that normally takes you to Oceanside, but something in me told me to review the route slip.  Wait a minute … I don’t see any reference to Camp Pendleton.  Instead, I see it make a right on Las Palmas, and not a left.  D’oh.  I can’t believe it … I gotta backtrack now.  Who knows how much time I’ve lost from the rest of the group.

Once we exit the freeway, I was supposed to go straight, but I decide to go right.  I look back, and see a crowd of 8 people going straight.  They came straight from the freeway, so they have to be doing the double.  So I hi-tail it and chase them down, and I immediately recognize the bib number on their camelback.  Whew, I’m back on the route.

I catch up to a pair of cyclists, and I didn’t want to lose them, for fear of getting lost again.  This is where I made a big mistake … they were going on a pace a little beyond my comfort zone.  Then I decided to reel back my pace … just can’t keep up.  I actually almost missed the turnoff from the bike path to the route .. luckily, Foster (who I had ridden with on previous doubles) pointed me in the right direction.  Thanks Foster.  Even then, I was not keeping up at a good pace.

Finally, I reach lunch around 12:30 pm, which doesn’t sound too bad, but wondered if I would be the last one … but I do see others come after me, so that helped me for my morale.

After lunch, we start climbing and exploring Fallbrook, and surrounding areas.  I think my lack of energy at this part can be due in part to lack of long distance rides … the longest I had done before that was 84 miles 3 weeks ago, and 76 miles 2 weeks ago.  One stretch that was a little dicey was coming west on Hwy 76 from Bonsall, and a two-lane highway, with no shoulder room.  I wasn’t sure if this was the right direction, but once again, I see another group going the same direction, so I’m good.

After a while, I see where they are taking us … we are backtracing how we got here in the first place.  So I find my way back to the bike trail.  I eventually meet up with a couple other cyclists at the water stop … you wouldn’t imagine how much of a relief it is to see another cyclist doing your ride.

We are now heading back on Hwy 76 back to I-5.  At this point, it started raining again, and this time it was hard … really hard.  My glasses were already off, and I tried to squint, but still could hardly see as I am riding.  The rain hitting my face really sting and it hurt!  I had to stop, let the rain attack me for a couple of minutes, turning my head away from the direction of the rain, until it subsided a little bit.  That was insane.

Now, we had to get onto I-5 going northbound, and that was a bit tricky.  This was a left turn off of Hwy 76, onto a cloverleaf on I-5.  Navigating a left turn, on a busy highway?

Now the adventure begins .. reading the route slip, it was hard to tell where we were supposed to go.  I did hook up with a few others, and we ended up missing the entrance to the other section of the bike path.  We wound up at another entrance to Camp Pendleton.  Oh, BTW, it is raining steadily at this point.  There were 4 of us, completely lost.  We were frantic, asking the security guards at Camp Pendleton, on where we need to be.  We must have wasted about 15-20 minutes, before we found out where we had to go … backtrack the bike path, then we found where we missed the other entrance.  Ah, back to familiar territory.

Oh but wait, we are on the wrong side of I-5.  We need to get to El Camino Real.  We finally get across, but one of the riders decides to SAG it in.  The remaining 3 of us decide to just forge ahead (once we know where we had to go).

We did eventually catch another pair of riders … very cool.  Plus, one of them seem to know how to get back, so we decided to hang in with them.  Tawny had all the directions at her disposal, so everyone was relying on her directions.  Another rider couldn’t wait, so he decided to move on.

For whatever the reason .. fatigue, rain … I lost contact with everyone …. after relieving myself, I got back on again, and if I’m out there all to myself, so be it.  I just could not sustain the same rate that everyone else was going.

I finally found my way to CP 4.  I reunited with my other riding buddies, but one of them was way too strong for me, so I rode the last 30 miles with Tawny. We did have one resident, who came by the CP, just expressing his displeasure at the ride (considering the weather conditions, it’s dark, and that we are riding “his” roads, even though these are public roads).  It doesn’t come as a surprise to me, but complaining to us is not going to do anything .. even when we told him who the organizer is, that still didn’t stop him from griping at us.  I just wanted to continue on, as I was just getting cold.

Looking at the elevation profile, climbing Trabuco Canyon doesn’t seem like it should be that difficult … but we have done 170 miles.  Oh, BTW, did I mention .. it’s raining, and hard?

The next short climb is Santiago Canyon, and on the descent, it was taxing on us.  Not only were my fingers cold and numb, without feeling, but my legs (both of them were shaking) … they were literally shaking.  I try to shift, and my fingers buckle trying to shift.  I’ve been in cold weather climbs before, but nothing like this.  This has to be the coldest ride I’ve ever been in … but then again, at least half of the ride was wet and cold.  Plus, the rain hitting my face was really painful. 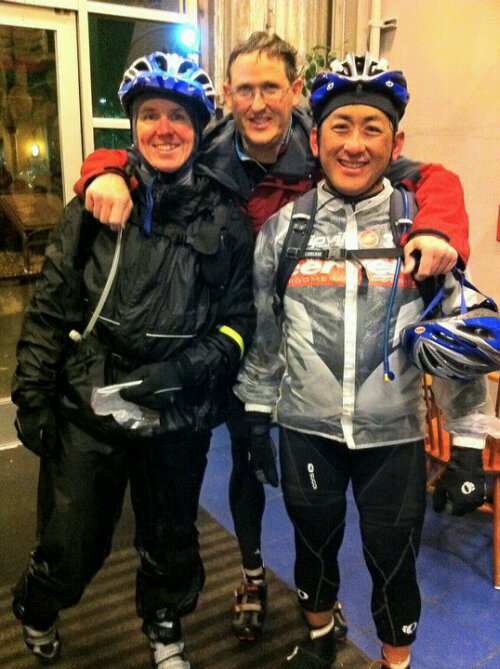 We finally finish, a little after 11 pm.  Actually, I later found out Tawny is also the same rider who rolled in at 2:45 am on Knoxville last year.  Talk about perseverence …her willingness to continue on kept me going.

Thanks Tawny for sticking with it with me … thanks Lynn for waiting around for my slow ass … and thanks Planet Ultra, for considering the conditions, to credit me with this double, even though I finished after the cut-off time.

This is the first time I was DFL (Dead Fuckin’ Last).  I guess you can call me the “Lanterne Rouge”.  And you know what … it doesn’t matter.  It was cool to have a SAG wagon hanging around us, guiding us to the finish.  With all we went through … cold, rain, getting lost, riding for about 20 miles on I-5, completing the whole route was the only thing on my mind.  Part of me wanted to call it in when I got dropped on Antonio, but I know I’ll hear ridicule from here to eternity, and I am not a quitter.

I don’t know why this was that difficult for me.  Perhaps I didn’t have enough long distance training?  Maybe I went out too hard?  Perhaps riding under driving hard rain all day/night contributed to it?  All I know is, I completed it, and that’s all that counts.