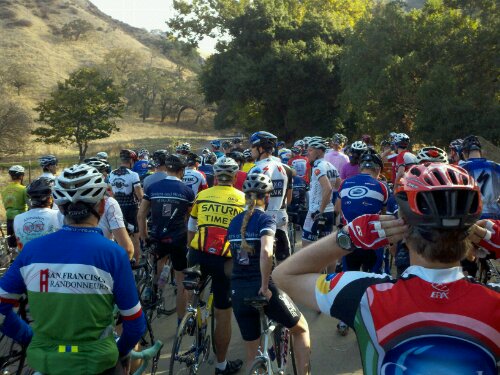 I signed up, came, and conquered Welch Creek …. well, maybe not conquered, but it sure was a fun ride.  I guess I’d have to define what fun is, shouldn’t I?

I parked at Fremont Bart and rode over to the registration area.  This gives me a good 8 mile warmup (in addition to the 5 extra miles from the registration area to the real start).  Of course, riding with Bogdan and Ramon, that just meant one thing … brisk riding, with a fast pace.  But at least it loosened me up for the climb.

This was a mass start, so I decided to move towards the back.  I’m not going to make the same mistake as on Portola State Park, where I was in the front, and having people pass me left and right.  It’s pretty amazing to see such a large mass of riders, climbing this road that gets pretty narrow in spots.

This was a tough climb the beat up just about everyone who rode it.  It starts out with a brutal 16% climb, then levels off to a mere 10% for a while.  The grade then fluctuates for a while, varying between 14% to 18%.  During this time, I know I am stuck in the back.  There were only 3 or 4 people close to me, but I did take a few glances, and I did see there were a couple of people also behind me.  I just wanted to get the 3 or 4 people ahead of me within sight, so that we providing me with motivation.

I did get to one point, where the pitch was so steep, and had to tack the hill.  However, when I was doing that, my toe got in the way of the tire, and I lost balance and had to dismount.  This was all right in the middle of climbing the 18-22% section of the climb.  It’s not easy to get back on the bike at such a steep grade, but I continued on.

It’s a good thing I rode this about a month ago.   This way, I knew when the tough part was over, and when to exert more energy.  I didn’t have the painful expression on my face like the last time, so I have a normal picture this time around.  I knew the top was a bit flatter, so I can upshift at 200 paces to go.  The strava time was 42:35, while the LKHC timer had it at 42:50.  Either way, it was still a personal best for me, by about 5 minutes.  There is just something about LKHC, that gives you that extra adrenaline.  It’s that target that you have in front of you, and the concentration of not letting the guy behind you overtake you.

On the way back, Ramon and I hooked up with Laura from Western Wheelers, who now rides with San Jose Bike Racing club.  She’s consistently near the top on the LKHC results, so she’s gotten really strong.  On the way back, we did an extra climb up Palomares, and that was fun.  Got to catch up on old times.  Not many times where I would be chatting while climbing.  It’s always great to hook up with someone you haven’t seen in a while, and have them complement you on how strong you have become.  Nice way to pat myself on the back. 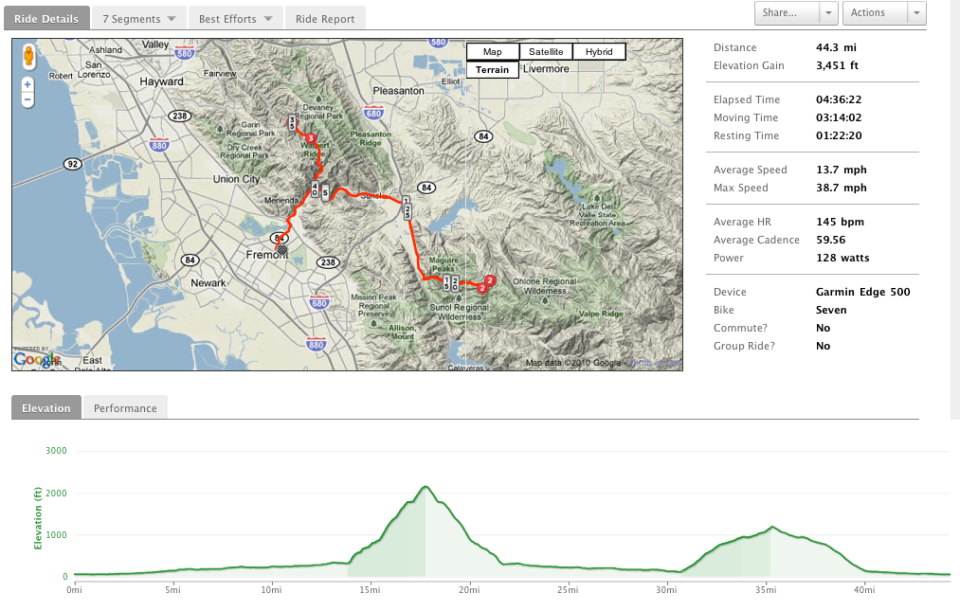 Bogdan actually had a video camera strapped under the saddle of his bike, and got a video up the climb facing backwards.  Of course, he was much faster than me, but at least you get a sense of the climb.